Hi spiro My car is going in next week for some work so will mention it to them then. Thanks

I too had issues with both non functioning stop/start and Eco mode cutting all functioning when parked (engine off) after about 2 minutes. Asked dealership to check battery condition also alternator functionality. Told it was a starter motor problem which eventually they replaced.
Stop/start worked all the way Home. Next day as before. Again went to dealership and requested they check the things I previously requested and was told the battery had been low on charge. Despite having driven 150 miles the day before. Eventually they agreed the battery was at 30% and arranged to change battery and alternator which had a fault. After waiting alternator from Germany these changes were made. So far, after two weeks all seems well. Fingers crossed.
Top

Grandlad wrote: ↑
Wed Nov 21, 2018 6:22 am
Rather like others I noticed that sometimes the start/stop wouldn't operate at the beginning of a journey but after a while would begin to operate. On other occasions it would operate right from the start. A bit of observation suggests an answer. If the climate control is set to 'auto' then start/stop operates when the target temperature has been achieved. If the climate control is not set to 'auto' then start/stop operates all the time ECO is set. I think this must be because of conflicting demands for electrical power and if there is any doubt about whether there is enough then stop/start is inhibited. With climate control in 'auto' the demand for power is variable and unpredictable.
Has any one else seen the same?

Vauxhall Technical team have advised me that when the battery reaches 75% of its capacity then the stop start will not work, they say this is a trait of the car.

Latest from Vauxhall re stop/start issue.
I had the battery changed in August 2020, stop/ start worked for 4 months then nothing. Car went in for a faulty drop link in March 2012 asked what the charge was on the battery, told 69%.
Bit the bullet and bought a smart battery charger which said the battery was good and would not charge it as it was 100%
Contacted Vauxhall yet again, finally got another check at master technician centre in Linwood and was told my battery was too low on charge 74% and it will not work unless its at 80%. Asked what the health of the battery was and told me it was 99% ???
This is the response from Vauxhall.

I write in reference to my previous email dated the 29th July 2021.

I have reviewed your further email with our Technical Department, who have confirmed that the minimum stage of charge target value is 75%, however this can fluctuate and is influenced by battery state of health, battery voltage, battery temperature and battery discharge current, each of which has values of their own which need to be meet in order for the stop-start system to work.

As stated in the owners handbook there are a number of general parameters that must be met in order for the stop-start system to operate which I have listed below, however I fully appreciate that some of the these items (such as low ambient temperature, failing close the driver’s door or not wearing your seatbelt) are highly unlikely to be a factor in this case:

We fully appreciate that the stop-start system on any vehicle can theoretically fail to operate as a result of a system malfunction, and in recognition of the concerns you have raised we authorised Arnold Clark Vauxhall to carry out further diagnostic checks on your vehicle, as a gesture of goodwill.

All our retailers are equipped with the necessary diagnostic equipment to check for faults and analyse live data from the various sensors and communication networks in the system in order to determine if a fault exists. Based on their findings during this investigation, we remain in a position where we are unable to accept that there is an issue with the operation of the stop-start system on your vehicle.

We do sincerely apologise the stop-start is not meeting expectations, and we would be unable to compare your current vehicle to another vehicle. The two models are designed completely differently and their respective stop/start systems have different specifications and may therefore operate differently.

Just to up-date since doing a 600 mile trip then a 400 mile trip, trying not to use the electrical systems I.e. Ac radio and blowers, the stop start works every time. My battery charger still says the battery is at 100% but Vauxhall don't trust what my battery charger says.

Totally fobbed off and that's even including the CEO of Vauxhall.
Top

Hi Robg.
I have the granland x in quartz grey on a 19 plate,
My stop start seems to only work in certain conditions, ie, when the outside temperature is between 18 and 20C.
But I have found that if the headlights are on and the blower is on anything higher than one the stop start doesn't work.
Also if it's too hot outside the light on the stop start button flashes and I get a message on the dashboard saying ambient temperature is too high for the stop start to engage.
I've only had the car for a few months and I love driving it but vauxhall cars do seem to have some quirky things that they do and no one seems to be able to explain why.
I tend to just leave the stop start on and if it works every time great, if it doesn't then I just put it down to something it's not happy with.
Not sure if this is going to help you in any way.
Stay safe
Russell B
Top

Hi Russell,
I have an 18 plate 1.6 deisle but I have never had any messages on the dash to say why the stop/start is not working, all the happens Is the stop/start light flashes 3 times but will not engage. If you have the response from Vauxhall you will see that they are not interested in fixing the problem nor are they willing to admit there is a problem which means they will do nothing to improve future models. I have lost all confidence in Vauxhall.
Stay safe Russell
Top

new2GLX wrote: ↑
Mon May 24, 2021 8:03 pm
Having purchased a vehicle with stop / start, I expect the feature which I’ve paid for, to work as expected. When it works it can be turned off. I have no confidence in the future of electric vehicles by GM/PSA if they can’t resolve a stop/start issue in current vehicles.

Have to agree, if something is fitted to your car as standard equipment then it should work. So the car has brakes to make you stop, so if the work irratically then thats just
something you would need to accept???
Vauxhall not the best with electrics, so as you say how would they be with electric cars???
Top

Hi Mark,
Are you saying they replaced the stop/start system?
Not sure what the reference ro OJ was.
I have included to CEO in my correspondence with customer service but it looks like the will not reply to me now. Sine doing 2 long journeys the stop/start works every time but who does 1000 moles every couple of weeks.
Regards Robg
Top

spiro wrote: ↑
Tue Nov 24, 2020 3:20 pm
Just a thought, I updated my satnav software today and kept the engine running while it was being installed and I wonder if you have to keep the engine running as the charge in the battery is not sufficient to install the software? It took 40 minutes and considering that the car is supposed to be environmently friendly the update process and with stop start never working it seems to defeat the object of the exercise and its enviromental credentials.

Maybe it could do with either Which or Clarkson involved to shake hings up a bit.

How did you get on with the update, I have downloaded the update from the web site but not sure if I want to take the chance in case it nackers up the satnav or anything else.
Regards Robg
Top

I paid to have my battery replaced at a Peugeot & Vauxhall dealership as under warranty they replaced it with a lower rating battery 720 instead of 760 which they wouldn't change it again even though they admitted they fitted wrong one. It now been around 2 months and so far so good.
Vauxhall Grandland X 2018 68 1.2 Elite Nav in Moonstone Grey with Intelligrip Adaptive Traction System
Grandland Global Forum Moderator
Top 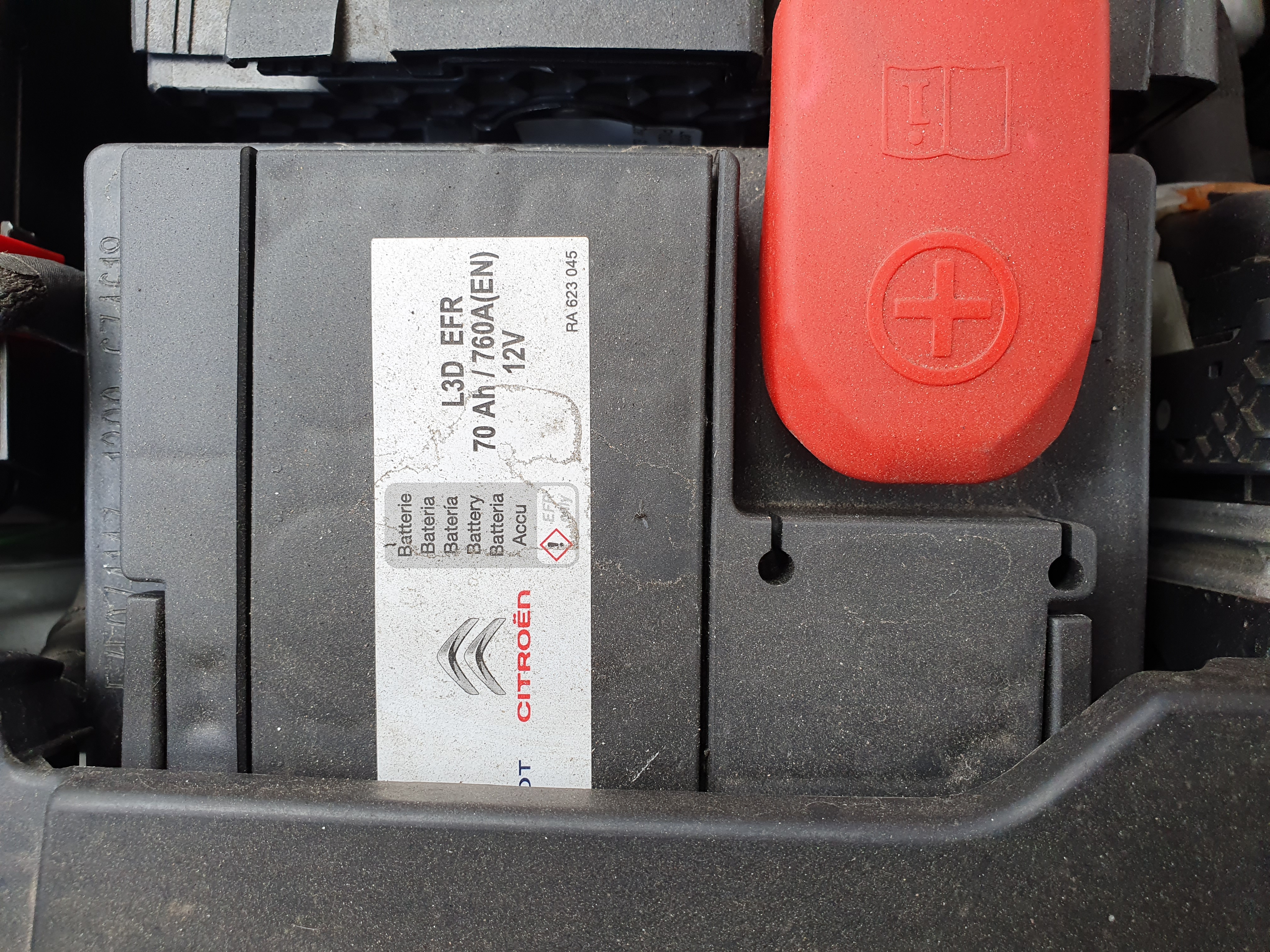 This is the battery they refitted some time back and it has not missed a beat with the Stop Start.
Grandland X Elite Nav White Jade. Panoramic roof and mudflaps, Nextbase 412 dashcam and an aftermarket reverse camera thats all it needs.

Our Vauxhall Grandland X Forums are free to join and open to all.